The death of a foster carer who was killed by a boy she was looking after was avoidable, an inquiry has found.

Dawn McKenzie, 34, was stabbed by the 13-year-old at her home in Hamilton in 2011. He was later detained for seven years after admitting culpable homicide due to diminished responsibility.  A fatal accident inquiry found that Mrs McKenzie’s death was not foreseeable.   It may have been avoided, however, had her fostering agency taken proper account of her inexperience. 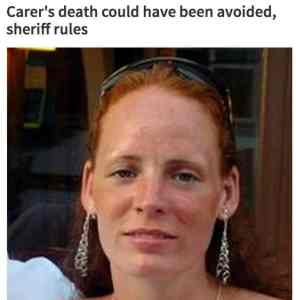 “With the benefit of hindsight … it is now known that tragedies such as that which befell mrs mckenzie can occur in foster placements, and there is no doubt from the evidence which i heard that lesser attacks on foster carers can and occasionally do take place.

The area of training of foster carers is clearly an important one.  I am prepared to accept given the evidence which I heard, that [conflict communications and physical intervention training] is more effectively given after foster carers have commenced their caring … it ought to be offered to new carers at the outset of their fostering career because that was when they were at their most inexperienced or vulnerable.

I can see no reason why such training cannot be given at the outset of a foster carer’s fostering career and repeated perhaps to more effect after a year or two years when they have more experience.

The care inspectorate feel that training is of paramount importance in relation to all placements to equip foster carers with the necessary skills and knowledge to meet the needs of the children placed with them.”

Fatal Accidents Inquiry into the Death of Dawn McKenzie 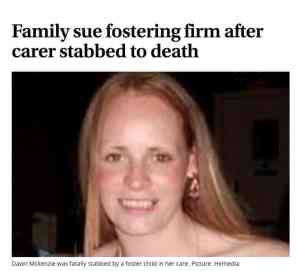 THE FAMILY OF A FOSTER ­CARER KILLED BY A ­TEENAGER HAVE LAUNCHED A £700,000 LEGAL ACTION AGAINST THE COMPANY WHICH HOUSED THE BOY WITH THEM.

The action at hamilton ­sheriff court had originally included a claim against ­glasgow city ­council, but that has now been dropped by the family.  The family are seeking £500,000 for Mr Mckenzie in compensation for Dawn’s death and £200,000 for her mother, Ray Byrne.

Both claims seek damages for loss and injury as a result of alleged negligence.  Mr. Mckenzie told a fatal ­accident inquiry into the ­killing that they had not been given enough information about the boy and had been let down by social workers.

Sheriff David Bicket ruled that the carer’s death could not have been predicted, but might have been avoided had the firm taken proper account of her inexperience.

Our course for your Foster Carers can be tailored to your specific needs (or the needs of a specific child/family), however we will always cover the key concepts from the Fostering Services Regulations related to the Children Act 1989 so that your staff will be able to make the best possible decisions about the management of concflict and the use of (last-resort) physical interventions where they become necessary.

Our course teaches your carers to:

THIS HAS MADE ME THINK ABOUT HOW I COULD DE-ESCALATE MY YOUNG PERSON BEFORE HE STARTS.  PHRASES AND CONCEPTS I COULD TRY.  IT GAVE ME CONFIDENCE IN HANDLING POTENTIAL SITUATIONS DIFFERENTLY.  THIS IS A VALUABLE COURSE WHICH SHOULD BE PART OF THE CORE TRAINING”

“I LEARNED A LOT ON THIS TRAINING COURSE AND WOULD HIGHLY RECOMMEND IT.  EXCEEDED EXPECTATIONS, EXCELLENT KNOWLEDGE FROM THE TRAINER AND APPROPRIATE TO THE REAL SCENARIOS I FACE IN MY WORK”

Dynamis Insight is a UK accredited provider of physical intervention training and advice for staff who look after vulnerable people in health, social care and education settings.