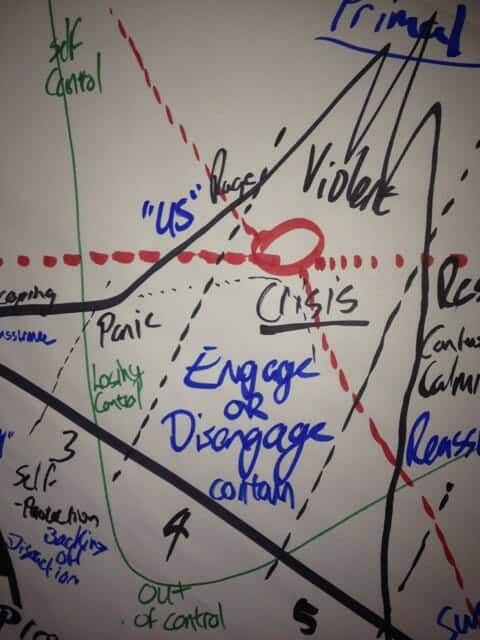 Positive Handling Duty of Care is a critically important concept for staff to understand if they are called upon to intervene to create safety in a dangerous situation.  Sometimes we see stories of teaching staff being injured by children in schools and receiving 6-figure payouts when they seek compensation.  One example of this is the story of teacher Colin Adams who was throttled by a 12-year old pupil at school and severely hurt his back, or the story of Judith Waugh who had her face gouged when a pupil attacked her from behind.  (Colin Adams Story) (Judith Waugh Story)

Other times though, the story isn’t so dramatic, involves little or no violence and doesn’t end in a publicised court case.

For example – and this story involves no violence or aggression – I met a Learning Assistant in January this year who had sustained a serious back injury during her school’s Christmas Lunch.

She recounted to me how the incident unfolded as follows:

“The entire school was in the dining room, having turkey and stuffing and enjoying some seasonal songs and merriment.   That’s when it happened; the 16-foot-tall Christmas tree which had been erected by the maintenance men came crashing down from its fixings.   It slammed down on a table with our Reception class sitting there and it collapsed the legs.  I heard the crash and looked on the floor, to see the tree lying on its side obscuring the top of the table and a tangle of 5-year-old limbs sticking out from under the branches.

That’s when I did it – I rushed over and started pulling at the tree limbs, reaching for any children’s limbs that I could to pull them free.  I stooped over the tree and grabbed it between my legs, straining to lift it off the children.   Eventually I was able to twist it around my body and get underneath it, stretching my back to lift it overhead so the children could get free.”

“Suddenly, I felt something give way in my back and there was a movement like I hadn’t felt before.   That was four weeks ago and I’ve got shooting pains from my heels to the top of my head.  I’m on heavy painkillers, but they are not working very well.  I’m having trouble sleeping.   I can’t drive, carry shopping or help my daughter with her baby (bending over the cot or strapping him in the car seat is impossible).  I’m going for an MRI next week so that the doctors can find out what I’ve done to myself, and in the meantime I’m off work indefinitely”

Now, before I go into this incident and the various Positive Handling Duty of Care lessons that I want to highlight from it, I want to be very clear:  the world needs its heroes.  There is no doubt about that.  I totally applaud this woman’s commitment to her work, her compassion for the children in her care and her (uncommon) ability to react without hesistation in the face of an emergency.

However, when I have asked groups of staff all over the country to describe her behaviour, they are unanimous in two things.   They admire her and they think she was reckless.  So how do we reconcile these ideas in regard to your Positive Handling Duty of Care?

Exactly what are we looking at here?

Let’s be clear – she absolutely has a duty of care to the children she is working with.   No question of that.  The protection of children from injury or harm is surely one of the most important duties that our school staff have.  As such, it is enshrined in legislation in a number of places.

Importantly though, she has a duty of care to herself.   Every person working in health and social care or education is aware of their sector’s professional standards which generally emphasise to a great extent the professional’s duty to safeguard and protect their client’s wellbeing, safety and security.  But when we look at the legislation covering duty of care at work (Health and Safety at Work etc. Act 1974 S.7) it is clear:   “It shall be the duty of every employee while at work to take reasonable care for the health and safety of himself and of other persons…”

To illustrate:  when a trained first aider at work turns a corner and sees a person lying sprawled on the floor, what should their first action be?   Correct!   They should assess whether it is safe for them to give first aid.   The “first responder” principle of checking for danger first is another way in which this common-sense idea “not to be a hero” is expressed at work.

“So what was she supposed to do?” people ask (often concerned that somehow I am suggesting to them that she should do nothing, which is far from the case).   I simply mention that the room was probably full of adults at the time, that there was likely some time and space available for her to collaborate with some team mates and form a plan to move the tree….all within 5 or 6 seconds of the incident and probably without any impact on the level of injuries sustained by the children.  Put simply:  she probably had time to call for assistance, and didn’t need to rush into the situation by herself (remember: The Number is Always 2!).

What consequences of her actions?   Well, let’s speculate about the nature of her injuries.   Perhaps a slipped or ruptured disc in her back, serious ligament damage or torn muscles.   She may be off work for a while (especially if she regularly works in Early Years where there is a considerable amount of work at low-level, bending, twisting  etc.) or if the injury is serious, it could mark a change of career or early retirement.  She may need to seek compensation for the injury.   The problem of course is that an organisation may take the view (and fight hard to maintain) that she was operating outside of what could be considered “reasonable care” for herself.   In our courses we refer to that label as “super-hero-syndrome”…..and we underline the fact that insurance companies generally turn away super-heroes!

One of the lessons here is that, although we DO have duties to the vulnerable people we look after, that duty doesn’t supercede the common-sense notion that you have to be able to help someone else SAFELY if you’re to do the right thing.

Some teachers ARE awarded six-figure sums for life-changing injuries they receive at work.   However there are two things to keep in mind:

In a future post, I will look at a concept from Verbal Defense and Influence called “Bystander Mobilisation” which is a powerful tool for putting moral values into action, for example in scenarios where you see your colleague erroneously transforming before your eyes into a ‘super-hero’….

Gerard O’Dea is a conflict management, personal safety and physical interventions training consultant.  He specifically helps staff to understand their Positive Handling Duty of Care.  He is the training director for Dynamis, a specialist in personal safety and violence reduction initiatives and the European Adviser for ‘Verbal Defense and Influence’, a global programme which addresses the spectrum of human conflict.  www.dynamis.training