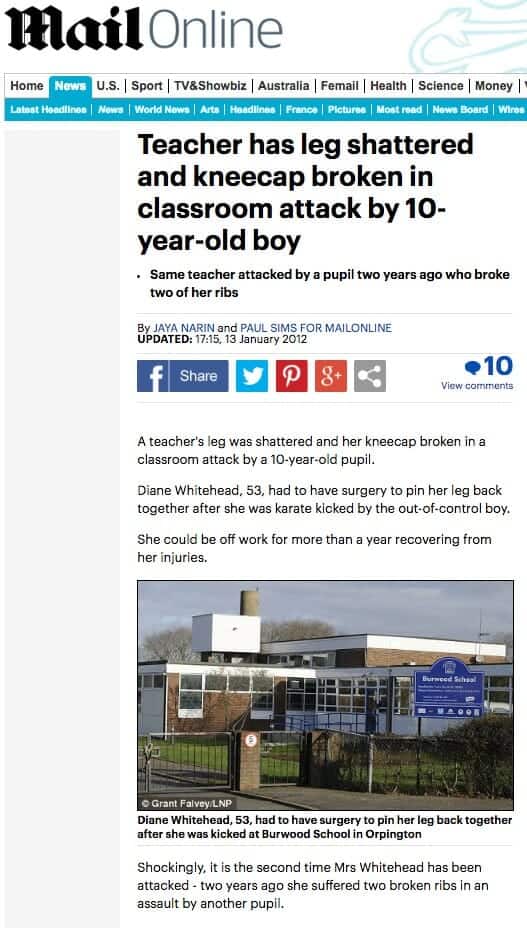 A teacher’s leg was shattered and her kneecap broken in a classroom attack by a 10-year-old pupil.

Diane Whitehead, 53, had to have surgery to pin her leg back together after she was karate kicked by the out-of-control boy.

She could be off work for more than a year recovering from her injuries.

Diane Whitehead, 53, had to have surgery to pin her leg back together after she was kicked at Burwood School in Orpington

Diane Whitehead, 53, had to have surgery

Mrs Whitehead’s parents Gordon and Wendy Mann, of Walton, Wakefield said the school was a local-authority-run centre for children with special needs.

But they said that should not mean that teachers doing their job should be put at risk from assault from disruptive and violent pupils.

Mr Mann, 77, said: ‘The boy was being very disruptive during class and had been told to calm down several times.

He was creating a problem. It escalated and my daughter and another teacher tried to restrain him, as they are trained to do so.

‘He then head-butted the other teacher and knocked her out. He then whipped round with a karate type kick on my daughter’s leg, breaking it badly.

‘She screamed out in pain and immediately fell to the floor. She couldn’t move. The pain was unbearable. An ambulance was called and the police attended.

‘The kick went up her leg and shattered the bone. It forced the leg bone straight up into her knee. It was so badly broken that the doctors who first examined her thought she had been involved in a car or motorcycle crash.’

The two teachers were taken by ambulance to a nearby hospital with the other woman suffering from bruising and a facial injury.